We are in social

General name. Ka-32T and Ka-32S modifications are usually meant under that name. Historically it comes from those times when there were no other modifications.

Ka-32Т modification was created to meet certification requirements. It is a deeper modification in comparison with Ka-32AO. Modification differs from Ka-32AO by the composition of the instrument equipment, which ensures the performance of IFR flights day and night; advanced full and static pressure system to improve measurement accuracy; as well as lightning protection of radio equipment units. The helicopter has a Transport category certificate and it was the basis for the emergence of new helicopters of the same type.

Modification of the Ka-32A helicopter for the fire service of Moscow. Designed in 1993. The helicopter is designed to evacuate people and extinguish fires of varying degrees of complexity, including high-rise buildings.
The helicopter differs from the basic version by additional communication equipment, a specialized fire extinguishing system, two floodlights and an external warning system loudspeaker. The helicopter is equipped with portable fire extinguishers, aerosol grenades and a horizontal hydraulic gun. Fire fighting equipment can be supplemented with a spillway device (hanging tank with a capacity of up to 5000 liters). For the evacuation of people from burning buildings, various transport and rescue cabins are used, mounted on an external sling. Non-parachute landing of fire crews in the mode of helicopter hovering is carried out using launching devices.
The helicopter is typically painted red and white.

Modification of the Ka-32A helicopter for law enforcement agencies. It was developed in 1994 in the interests of the GUVD of Moscow. The helicopter was intended for transportation of civilian personnel, search for criminal groups and landing of special forces personnel.
The helicopter differs from the basic version by a modified fuel system, additional communication equipment,searchlights and two speakers of an external warning system. The fuel system of the helicopter does not have fuel tanks No. 5 (along the sides of the fuselage), the existing fuel tanks are equipped with polyurethane foam. External lighting equipment is supplemented by two searchlights: at the nose part of the fuselage and on a movable truss in the opening of the cargo hold door. Non-parachute landing of the special forces personnel in the helicopter hover mode is carried out through the doorway of the transport Cabin with the help of launching devices. For the possibility of using weapons by personnel, the helicopter is equipped with pivot mounts for machine guns or machine guns.
The helicopter has spotted camouflage painting. There was just one aircraft produced. Subsequently, it was converted back into a civilian Ka-32A.

Ka-32C modification was created for the Armed Forces of the Republic of Korea. Korean designation of the aircraft is HH-32A. The helicopter is additionally equipped with a WSR, an on-board computer with Multifunctional indicator, a flood light, VOR / ILS short-range navigation and landing systems, and foreign radio stations [4]. The helicopter was developed at KumAPP JSC together with Israeli companies.

Project of a passenger helicopter based on Ka-32A. The project was distinguished by an enlarged fuselage (transport Cabin), adapted for the passengers. Aircrafts of that design were never produced.

Ka-32A modification as a result of certification in Canada in 1998. “BC” stands for British Columbia. [5] The helicopter is distinguished by a two-chamber steering system (power steering control unit), an updated equipment composition and color marking of devices in accordance with the requirements of international standards. The helicopter is available in two main types of instrumentation: with analog instruments in the cockpit and with MFIs. The modification of the helicopter was characterized by increased resources and terms of service of the main components up to 2011. The helicopter is being actively used for the transportation of goods on an external sling, including for skidding, construction and fire fighting. It is possible to install various optional equipment of Russian and foreign production. The helicopter was exported only till 2011. The helicopter of this modification is certified in Australia, Brazil, Europe, Canada, China, South Korea and Japan.

Modification proposed for the modernization of the South Korean Ka-32 fleet . It involves the installation of a more powerful VK-2500PS-02 engine, new fire-fighting equipment and avionics. [6]

The performance of the helicopter Ka-32A11BC for Switzerland. It was considered an independent model, created on the basis of the Ka-32A11BC up to the 2011. Since 2011 Ka-32А12 is considered As the Ka-32A11BC modification (individual version) and is United with it in the type certificate. The modification is characterized by altered structure of instrumentation, developed in cooperation with the operator Heliswiss. there were only 3 aircrafts released . Helicopters have a red-and-white signature color of the operator.

Early model designation: Ka-32A-O. The wrong designation Ka-32A0 is often found. Ka-32T Modification was created in order to fulfill certification requirements. Certified main engines TV3-117VMA (TV3-117VMA series 02) are installed on the helicopter. Additionally installed: ATC transponder and heat-resistant shockproof tape recorder. Protecting titanium sheets under the main and auxiliary engines. Helicopter electrical systems are divided into starboard and port systems. The sling system is additionally equipped with an emergency reset mechanism. The color marking is applied to the instrument panels in the cockpit. The helicopter is certified by the IAC AR and has a certificate of a type of Limited Category for the transport of goods, subject to visual flights during the day. The letter “O” in the designation of the helicopter comes from Category.

The helicopter is a specialized version of the Ka-32T for complex construction and installation works (“crane helicopter”). This modification is distinguished by an additional semi-retractable operator’s cab located in the rear of the fuselage. The helicopter is equipped with a fundamentally new electronic remote control system (EDSU), which allows piloting from the main cockpit of the pilots, as well as from additional operator’s cab. There is an automatic damping system for the vibration of the cable with the load on the external sling and a system for automatically maintaining a constant angle of the tensioned cable connected to the load located on the ground. To monitor the load, the helicopter is equipped with a television system, which consists of two cameras:installed under the tail movable cam. in the longitudinal plane , and fixed, vertically placed inside the fuselage near the external sling cable. Both cameras have adjustable apertures and focal lengths. There are two screens in a cockpit: one for HAC and another one for co-pilot. You can display an image from any of the cameras on each screen. There was only one prototype helicopter of this modification produced. The first flight took place on December 28, 1991. The helicopter was first seen at the aerospace exhibition in Berlin in 1992.

Transport modification of Helicopter for transportation of large-sized cargo on the external sling, transportation of people and cargo in transport Cabin. From Ka-32S differs by the absence of the “Osminog” locator and its nose section airfoil. Also, there is no search and rescue equipment on the aircraft. The helicopter is the same type as Ka-32C. 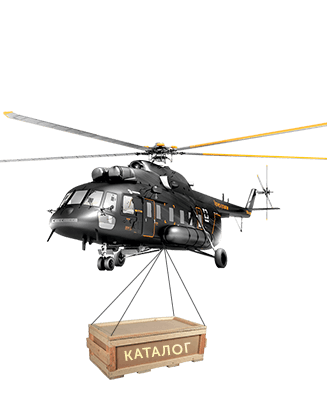